Hi there and welcome! 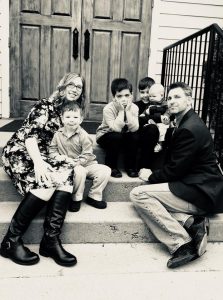 My name is Amanda Saladin and I live near Nashville, TN with my hubby and our four boys.  I am a high school teacher (so is the hubs!) and our lives are crazy busy but we are passionate about creating knit and crochet patterns the whole family can enjoy.  I design patterns for everyone from newborns on up!
Here is a bit about my knit/crochet design career:

I started designing knitwear in October 2011.  I have a bachelor’s degree in fashion design, but never linked my love of knitting and crocheting with my designing until then!  I started knitting during college at Middle Tennessee State University in 2002.  I picked a worsted weight yarn and size 8 needles for my first scarf…. and it got old really quickly so I kind of gave up for a while.  I only made my scarf long enough to get a grade!

Skip a couple of years and I was living in North Carolina with my husband who was in the Army at the time.  The guys got deployed and a friend of mine said she wanted to learn to knit so I told her I knew the basics and we started making scarves… and scarves… and well, more scarves!  That’s the only thing I knew how to do.  Eventually though I tried a hat in a super bulky yarn that ended up way too short!  But it was too late – I was hooked!  (Well, not actually because I still didn’t get the hang of crochet for another two years!)

When I finally learned to crochet it was 2006 and I was teaching elementary art back in my hometown area of Nashville, TN.  I couldn’t see the stitches because in knitting they are all on a needle, so the V’s didn’t make much sense to me, but somehow I finally got the hang of it and then it was second nature – it felt even more natural than knitting!  Now I was really hooked!

From that time until 2011 I casually made things to give away as gifts and an occasional item for myself, although those were few and far between.  I decided to create a few things for the TN State Fair and everything I made placed first or second!  So that sparked a desire to see if I could design.  I sent out several submissions to quite a number of magazines, knit and crochet, and in December 2011 I got my first two acceptances – one for Crochet Today! and the other for Crochet World.

Since then things have been going almost nonstop.  I worked from December until June without a break from designing, doing all the stitching myself – even working four projects in a month!  On top of all this, I am a full-time high school teacher, a wife, and mother to three young boys.  Let me say, sometimes getting time to sit and work on a project is next to impossible!

So far I have completed patterns for several issues of Crochet Today!, Crochet World, Crochet! I Like Crochet, and have knitting patterns in issues of Your Knitting Life, Vogue Knitting, Knit Simple, I Like Knitting and Creative Knitting.  I have also created patterns for Red Heart yarn and self publish free patterns on my site when I get a chance.

So, that’s me and kind of an overview of how I got to where I am now in my design career.  So far, I’ve had over 80 designs published – most of which are crochet, but my knitting is picking up steam.  I can’t decide between the two – I love them both so much!  So this site is a combination of my love for yarn, whether it be crocheted or knitted. 🙂