In honor of Valentine’s day coming up I wanted to design a simple something that could be given as a gift. The right project had to look nice, work up quickly, and be beginner-friendly.  I settled on a bracelet as the item I wanted to create and tried out several different ideas that were quickly ripped out. 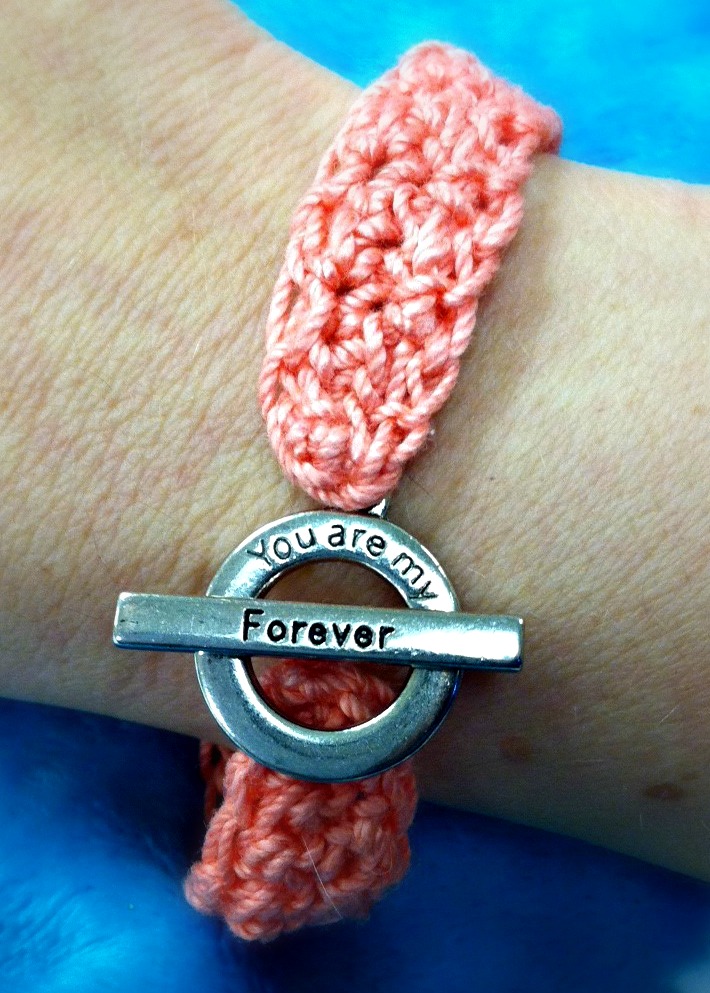 While working on a jewelry project for an upcoming magazine issue I had to go to Joann for some findings and it really opened my eyes to new possibilities.  I had never really considered designing much jewelry before but I really got inspired by all the beautiful clasps, chains, and beads.  It was amazing!  You would think that I didn’t take a couple of jewelry making classes in college, but to be fair we did more soldering and hammering metal than working with findings at Joann. When I saw this toggle clasp I knew it was crying out to be made into a crochet bracelet.  I never knew these could be so inexpensive, either, especially when you use coupons!
This project is so simple I made it after school in my classroom in half an hour from start to finish. I even took most of these pictures there before I had to go pick up my boys!  It is a very simple three rows using only single crochet and chains.  I am seriously thinking about making another and adding beads – something I’ve never tried before. The crisp cotton of this crochet thread looked so good with what I had on that day (black cotton dress with jean jacket) that I wore it the rest of the day and am planning on wearing it again really soon.
To buy a large print, ad-free pdf of this pattern for $1.99 click HERE

Fasten off.
Finishing:
Weave in ends.
Sew toggle clasp to ends.
Here are a few other clasp ideas: